A mole is the quantity of anything that has the same number of particles found in 12.000 grams of carbon-12. That number of particles is Avogadro's Number, which is roughly 6.02x10 23. 1 ﻿ A mole of carbon atoms is 6.02x10 23 carbon atoms. A mole of chemistry teachers is 6.02x10 23 chemistry teachers. The Mole – Lesson Day 12 Engagement Phase Duration Students will watch the video ‘Avogadro’s Number Song’ and complete the following. Watch the video and answer the questions in the file.

One problem we have, however, is that it is extremely difficult, if not impossible, to organize atoms one at a time. As stated in the introduction, we deal with billions of atoms at a time. How can we keep track of so many atoms (and molecules) at a time? We do it by using mass rather than by counting individual atoms.

So we have established that the masses of atoms are constant with respect to each other, as long as we have the same number of each type of atom. Consider a more macroscopic example. If a sample contains 40 g of Ca, this sample has the same number of atoms as there are in a sample of 7 g of Li. What we need, then, is a number that represents a convenient quantity of atoms so we can relate macroscopic quantities of substances. Clearly even 12 atoms are too few because atoms themselves are so small. We need a number that represents billions and billions of atoms.

A mole represents a very large number! If 1 mol of quarters were stacked in a column, it could stretch back and forth between Earth and the sun 6.8 billion times.

Notice that we are applying the mole unit to different types of chemical entities. The word mole represents a number of things—6.022 × 1023 of them—but does not by itself specify what “they” are. The chemical entities can be atoms,molecules, formula units and ions. This specific information needs to be specified accurately. Most students find this confusing hence, we need to review the composition of elements, covalent and ionic compounds.

Most elements are made up of individual atoms, such as helium. However, some elements consist of molecules, such as the diatomic elements, nitrogen, hydrogen, oxygen, etc. discussed in Section 2.2. One mole of He consists of 6.022 × 1023 He atoms but one mole of nitrogen contains 6.022 × 1023 N2molecules. The basic units of covalent (molecular) compounds are molecules as well. The molecules of 'compounds' consist of different kinds of atoms while the molecules of 'elements' consist of only one type of atom. For example, the molecules of ammonia (NH3) consist of nitrogen and hydrogen atoms while N2 molecules have N atoms only. Compounds that are ionic, like NaCl, are represented by ionic formulas. One mole of NaCl, for example, refers to 6.022 × 1023 formula units of NaCl. And, one formula unit of NaCl consists of one sodium ion and one chloride ion. Figure 6.1.2 summarizes the basic units of elements, covalent and ionic compounds

Conversion Between Moles and Atoms, Molecules and Ions

Using our unit conversion techniques learned in Chapter 1, we can use the mole relationship and the chemical formula to convert back and forth between the moles and the number of chemical entities (atoms, molecules or ions).

Because 1 N2 molecule contains 2 N atoms, 1 mol of N2 molecules (6.022 × 1023 molecules) has 2 mol of N atoms. Using formulas to indicate how many atoms of each element we have in a substance, we can relate the number of moles of molecules to the number of moles of atoms. For example, in 1 mol of ethanol (C2H6O), we can construct the following relationships (Table (PageIndex{1})):

The following example illustrates how we can use these relationships as conversion factors.

If a sample consists of 2.5 mol of ethanol (C2H6O), how many moles of carbon atoms, hydrogen atoms, and oxygen atoms does it have?

Using the relationships in Table (PageIndex{1}), we apply the appropriate conversion factor for each element:

Note how the unit mol C2H6O molecules cancels algebraically. Similar equations can be constructed for determining the number of H and O atoms:

How To Calculate The Number Of Moles

If a sample contains 6.75 mol of Na2SO4, how many moles of sodium atoms, sulfur atoms, and oxygen atoms does it have?

We can use Avogadro's number as a conversion factor, or ratio, in dimensional analysis problems. For example, if we are dealing with element X, the mole relationship is expressed as follows:

We can convert this relationship into two possible conversion factors shown below:

If we are dealing with a molecular compound (such as C4H10), the mole relationship is expressed as follows: Outline for writing an autobiography.

If working with ionic compounds (such as NaCl), the mole relationship is expressed as follows:

Because there are two ions per formula unit, there are 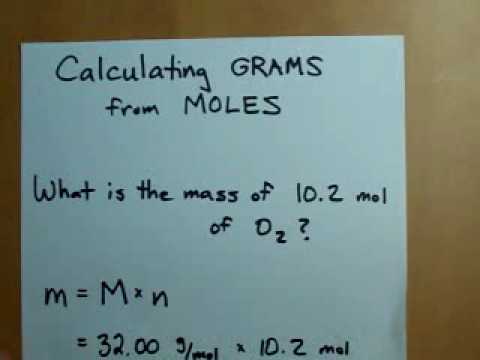