The following guide will show you How to watch Sky Go on Smart TV. The Sky Go app is excellent for watching TV channels from Sky and other UK-based networks. It also has a vast library of on-demand movies, TV shows, and box sets, offering hundreds of hours of entertainment on the go.

However, the list of compatible devices is quite limited, which is something you may have noticed when trying to watch Sky Go on smart TV. Although you can watch live TV channels and on-demand content on your Sky TV box, the complimentary online service Sky Go isn’t as versatile as they advertise it to be.

Assuming that you have a Sky TV subscription, you can follow this guide to learn more about watching Sky Go on smart TV. We have also included a few workarounds to get Sky Go working on other devices.

Is it Possible to Watch Sky Go on Smart TV?

There are a few things you need before you can watch Sky Go on your smart TV, and one of them is Chromecast.

Whether it’s a dongle solution or your TV has Chromecast built-in, it will be required for mirroring content from the Sky Go app.

Alternatively, you can use an HDMI cable to connect a PC or laptop to your TV for streaming Sky Go channels and VOD content.

Even though Sky Go is one of the biggest streaming services in the United Kingdom, the famous pay-TV provider Sky still doesn’t officially support Android TV, Amazon Fire TV, and Samsung/LG/VIZIO smart TVs.

Despite the unavailability, subscribers have found alternative ways to watch Sky Go on their TVs, which you can check out below. We have tested some of the workarounds and found them to be working.

The Sky Go app doesn’t have Chromecast support. People often mix up the UK version of the Sky Go app with the one available in New Zealand, which officially supports Chromecast devices.

Still, there’s a way to cast Sky Go content to Chromecast from a PC or laptop, with the whole process going as follows:

If you have followed the steps correctly, then you should be able to watch Sky Go content on your TV over Chromecast.

Connecting your PC or laptop to your TV over HDMI is the hassle-free way to watch Sky Go content.

As long as there are HDMI ports on both of your devices, you can use an HDMI cable to connect your computer to your TV and mirror your desktop over a wired and reliable interface.

After that, simply launch the Sky Go app from your desktop and begin playing back a live TV channel or on-demand content on your TV.

It’s worth mentioning that this workaround won’t work if you use an HDMI adapter to connect your smartphone to the TV.

Also, make sure to plug one end of the HDMI cable to your TV’s HDMI port that supports at least HDCP 2.2 (High-bandwidth Digital Content Protection). Otherwise, you will only see a black screen in the Sky Go app player.

Can I Put Sky Go on my Smart TV Using a PlayStation 4?

While PlayStation 4 is primarily advertised for playing games, you can also use it as a Blu-Ray player or a streaming device to watch movies, TV shows, and live TV channels.

Sky officially offers its streaming app named “TV from Sky” for the PS4. Although it’s not the same app as Sky Go, TV from Sky shares the same content library.

Here’s a step-by-step guide on how to watch Sky Go on TV using a PlayStation 4:

Once you are logged in to the “TV from Sky” app, you will be able to watch almost all the live TV channels included in your Sky TV subscription, as well as stream catch-ups, movies, and TV box sets from Sky’s on-demand library.

Watch Sky Go on TV Using an Xbox One

The “TV from Sky” (Sky Go alternative) app is also available for the Xbox One game console. If you have one lying around, you can use it to watch Sky channels and on-demand box sets on your TV. Just do the following:

Upon successful login, you can watch the same live TV channels and on-demand content from the “TV from Sky” app, as you would find in Sky Go’s streaming library. Note that you will have to pay for the Sky Go Extra add-on, similar to what we need for “TV from Sky” to work on PlayStation 4.

Can I Get Sky Go on Android Box / TV?

Unfortunately, there’s no official Sky Go app for Android TV, Fire TV, or Apple TV devices. You can only get the Sky Go mobile app on Android and iOS smartphones/tablets from their respective app stores.

While it’s possible to sideload the Sky Go APK file on Android TV and Fire TV, it will simply crash or show you an error message when you try to get past the login screen.

Also, a lot of sites trick users into installing a “modded” version of the Sky Go app that apparently works on Android TV and Fire TV devices.

However, most of these modified APK files are injected with malicious code that is meant to collect your sensitive information and slow down your device. We recommend you to avoid installing untrusted APK files from such websites.

Check –Chromecast Mobdro: How to Cast Mobdro to TV?

This guide has hopefully cleared your doubts about watching Sky Go on smart TV. While there is no official Sky Go app for Android TV or LG/Samsung/Vizio Smart TVs as of now, you can follow one of our workarounds and watch your favorite Sky Go channels and on-demand content on your big screen.

In this article, you will find the exact step by step instructions to watch Sky Go on Chromecast.

The availability of subscription-based, on-demand video streaming services in the United Kingdom is quite low compared to what you can get in the rest of the world.

For example, there are more than 50 television networks in the United States that offer its TV Everywhere services (requires cable login) on mobile devices, media streaming players, and modern web browsers. Also, dozens of VOD and live TV streaming services are available on a subscription basis.

BBC iPlayer is one of the few catch-up services that you can watch for free, albeit with a TV license. The list of premium on-demand services in the UK is quite underwhelming due to the monopolies of UK-based pay-TV services like BT, Sky, and Virgin Media.

However, they also offer catch-up services to their users, and Sky Go is one of the better ones in that regard.

Since many of you seem to use a dedicated Chromecast device or a TV with Chromecast built-in, we have prepared this guide to help you cast content from Sky Go on Chromecast.

What can you watch on Sky Go?

It should be mentioned that Sky Go is exclusive to Sky TV customers only, and it can be availed without paying an extra charge. You will need your Sky ID to log in to the service.

Depending on your Sky TV subscription, your streaming library on Sky Go will vastly vary. Since it’s considered as a complimentary service for Sky TV subscribers, it’s mandatory for users to pay for the connection.

On Sky Go, you can watch most of the free-to-air channels, including ITV and Channel 4. The service also incorporates all Sky Cinema and Sky Sports channels.

Based on what you have in your Sky TV subscription, you might get access to Sky Atlantic as well, which hosts a variety of blockbuster movies and broadcasts HBO originals, including Game of Thrones, Watchmen, Chernobyl, Westworld, The Outsider, etc. Channels like Sky Comedy, Sky Crime, Sky Nature, Sky One, Sky Documentaries, and many more are available to watch on the Sky Go service.

If your Sky TV subscription includes Sky Sports, then you will get to watch all the Sky Sports channels on the service, which are Sky Sports Premier League, F1, Golf, Cricket, Football, Main Event, Arena, Action, Mix, Racing, etc. You can basically watch live and on-demand sports content on Sky Go.

Do you need Sky Go Extra to Chromecast Sky Go? 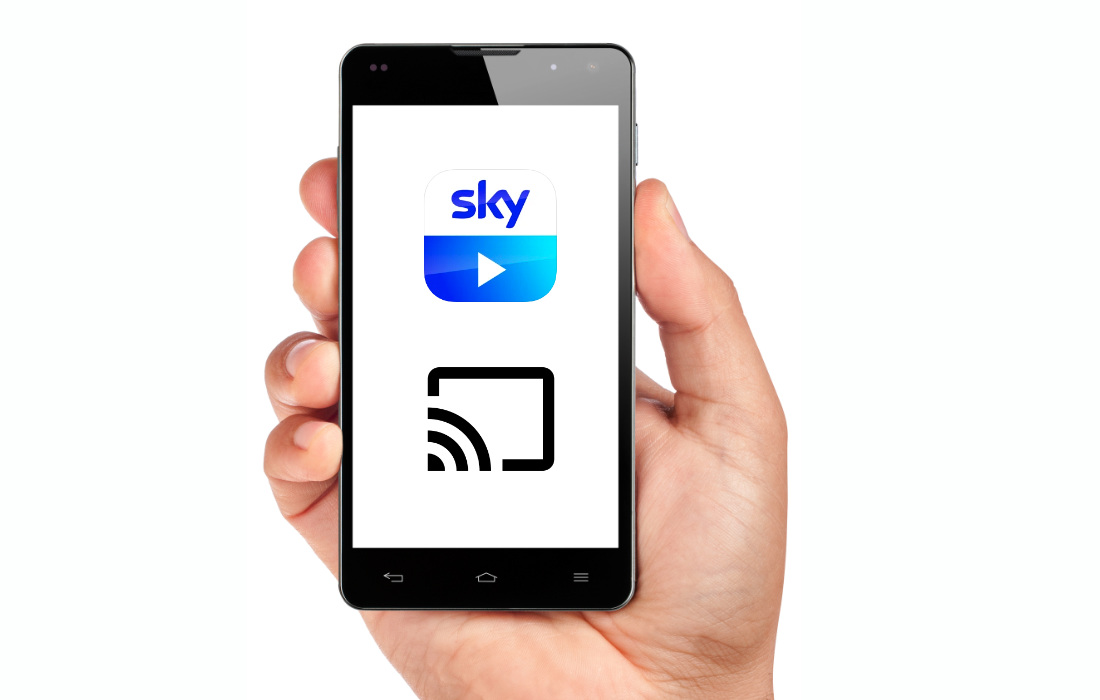 Many of you probably are confused about Sky Go Extra, whether you need it or not. Fortunately, all you need is a Sky TV subscription, and you won’t have to pay for the Extra add-on. It doesn’t matter which device you use to watch Sky Go; the Sky Go Extra only gives you an offline download option.

You can only download what your Sky TV subscription includes. There are a few restrictions on the latest catch-ups, but select on-demand programming can be downloaded and stored for up to 30 days offline and can be accessed from the Sky Go app.

The Sky Go Extra add-on adds £5 to your existing Sky TV plan, and you won’t need it to watch Sky Go on Chromecast.

Can you Cast Sky Go to Chromecast?

The answer to this question varies based on where you live. A vast majority of people often mix up the Sky Go service in New Zealand with the UK one. The NZ variant of Sky Go natively supports Chromecast, but the same can’t be said for the UK variant.

However, it’s still possible for Sky TV subscribers in the United Kingdom to watch Sky Go on Firestick using the screen mirroring option, which we will discuss in the next section of this guide.

It’s worth mentioning that Kiwi Sky Go users can use Android and iOS devices to cast content on the first, second, and third generations of Chromecast devices.

How to Cast Sky Go on Chromecast in the UK

Although Sky Go users in New Zealand are in luck, British Sky Go users will have to follow a different workaround to cast Sky Go on Chromecast. Unfortunately, you won’t be able to use your Android or iOS device, and you will need a PC instead.

The Sky Go app on Android and iOS has DRM restrictions, which means you won’t be able to mirror any content on your Chromecast. It will simply show you a black screen.

However, you can take advantage of the desktop version of Sky Go, which doesn’t have any sort of DRM system in place. You will also need Google Chrome, which does let you cast the desktop and browser tabs. Here’s how you can do it:

Note:If your PC and Chromecast is connected to the same home network, then you should see your Chromecast device in the list. Otherwise, it won’t work.

That’s it! You should see your full desktop mirrored on your Chromecast. Audio will work out of the box. You won’t have to configure anything else.

You can now return to the Sky Go window and stream your favorite TV channels and TV shows on your Chromecast.

Our workaround to watching Sky Go on Chromecast is a bit complex, but it will do the job just fine. Until Sky TV UK adds back the cast functionality on its Sky Go app, you can follow the steps above and watch Sky Go to Chromecast device.

If you experience artifacts or stutters in the mirrored feed, make sure that your PC and Chromecast device receives adequate Wi-Fi signal strength. Also, if you have a Wi-Fi router set up, then connect your PC or laptop to it over Ethernet for the best Chromecast experience possible.