Soon Microsoft are to release an update to the Office 2016 Volume License installer on VLSC.

These changes are going to be later enforced in 15.20 & onwards. Below are some details on the changes, some of the why & how via the power of the MacAdmins.org Slack & the awesome @pbowden that some of us have had a sneak peek. 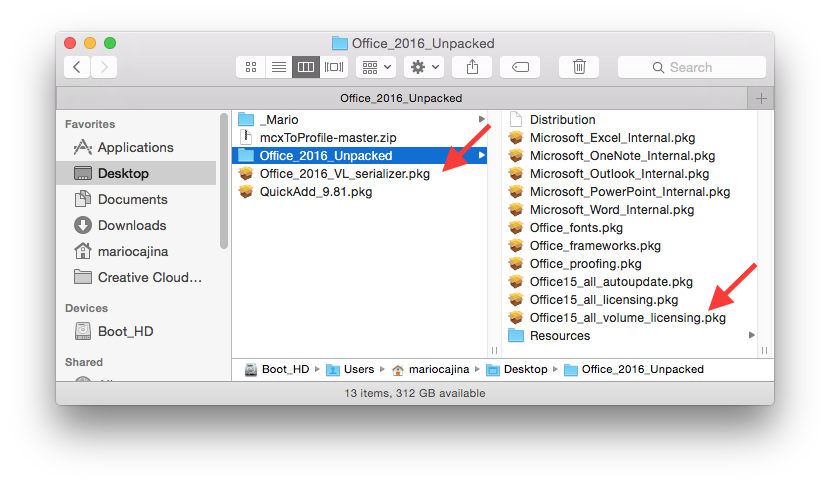 When you download the .iso from VLSC you’ll notice two packages within it:

The change is the new second pkg: “Microsoft_Office_2016_VL_Serializer.pkg” Well, for a while now it’s been fairly common practice to deploy the Office license to Macs outside of the Office installers or updates.

This came about as on occasion an Office Update or Installer would delete the file.

However, whilst the deletion itself was a bug, the ability to use the license.plist across Macs was also a bug.

With Office 2016, Microsoft are moving to a device based serialisation method. Which means that deploying the plist /Library/Preferences/com.microsoft.office.licensingv2.plist will no longer work.

This device based serialisation is based around the generating a license on the Mac that is to be running Office 2016.

Also, if you install Office 2016 whilst booted to another volume (as in when installing via a NetBoot or NetInstall volume or something like Target Mode Imaging), again the serialisation will not work.

To install Office 2016 from another volume & have the serialisation work, cache it locally on the Mac being imaged & install on first boot or if using Casper Imaging check “Install on boot drive after Imaging” for the PKG from within Casper Admin.

However, to enable Office 2016 to be correctly licensed in the multitude of deployment scenarios that we mac admins employ, @pbowden & his team have created the “Microsoft_Office_2016_VL_Serializer.pkg”

To be clear, this will only affect you if using the Volume Licensed version of Office 2016 & not the Office365 version.

What happens if I carry on copying the licensing.plist?

For now, not much.

How did people find this out?

Well a little over a month ago a gentleman with the nick @pbowden hopped into the #microsoft-office channel on the MacAdmins.org Slack, this was awesome as @pbowden is a: Software engineer for Office for Mac/iOS at Microsoft, a fellow Brit & nice guy.

6pm utc to ist. It’s been a great few weeks with the community sharing feedback with @pbowden & some of us being able to test pre-release installers for Office.

I hope this warning has been as helpful to you, as it was when @pbowden shared it with us.