‘Knives Out’ has been elaborately categorized as an ensemble black comedy-thriller. However, at its core, the movie is a murder mystery that promises to tug at the boundaries of the genre, and break it down, only to rebuild it. Aptly, it has been labeled as a modern take on the mystery genre. The basic plot is about a dysfunctional family that comes together for a gathering to find that things have gone horribly wrong when the patriarch shows up dead. A master detective shows up to investigate, only to become increasingly baffled by the case.

The film comes from Rian Johnson, who started off on a similar note, making the fantastic movie ‘Brick’. However, his directorial debut channeled the noir vibes to a high school setting. ‘Brick’ makes it clear that Johnson knows his mystery genre well enough to shake things up. However, while ‘Brick’ is a clear homage to hardboiled writers like Dashiell Hammett, ‘Knives Out’ has been structured like a classic locked-room mystery with a limited number of suspects, which is a trademark of Agatha Christie.

The movie promises to be an entertaining watch and one that will certainly keep us guessing as the filmmaker gradually reveals all the pieces on the table like a magician setting up a grand act. We are definitely excited to see how the star-studded cast accentuates the plot with their performances. Thus, without much ado, we bring you everything that we know about ‘Knives Out’, the upcoming film.

Knives Out Plot: What Is It About?

‘Knives Out’ follows acclaimed and wealthy crime novelist, Harlan Thrombey. For his 85th birthday, he invites the members of his dysfunctional family to attend a gathering at his remote mansion. The hope is to reunite them all. However, the next day after the birthday party, Harlan is found dead by the members of the family.

This is where the Christie-like locked room mystery begins to add the features of a classic whodunnit, as masterfully portrayed by Alfred Hitchcock. We get the inkling that everything might not be as it seems when lead detective Lieutenant Elliott is more than eager to write off the death as an overly dramatic suicide. He believes that Harlan slit his own throat. Despite this, the investigation reveals that the party on the night before had its share of shouting matches and confrontations among various members of the self-righteous and largely indignant Thrombey family. Finally, an experienced private investigator, Benoit Blanc, is called to get to the bottom of the case. However, he soon becomes flustered as he comes to realize that everyone might be a suspect in the possible murder.

Knives Out 2 and Knives Out 3 will be exclusive to Netflix, naturally. Orbital, the Gadgets 360 podcast, has a double bill this week: the OnePlus 9 series, and Justice League Snyder Cut (starting. Knives Out 2 release date: Netflix movie’s cast, trailer and plot. Daniel Craig, Ana de Armas and Chris Evans starred in the first whodunnit - find out everything you need to know about the next.

Chris Evans, Daniel Craig, Jamie Lee Curtis, Katherine Langford, Michael Shannon, Anna de Armas, Don Johnson, Jaeden Martell and Rian Johnson of 'Knives Out'. Knives Out: Our Favorite Movies From Each Cast Member February 26th, 2020 Though it was released back in November, Rian Johnson’s KNIVES OUT continues to hold on strong at the box office, and remains within the top 15 movies currently playing in North America.

At its core, ‘Knives Out’ asks who committed the murder, but through the investigation, we are made aware of the household tensions that exist between different members of the family. We come across a bevy of fascinating characters like Harlan’s meek nurse, Marta, who vomits uncontrollably whenever she lies. This seems to be a particularly disadvantageous medical condition to have when one is caught up in a murder investigation and is likely to be privy to the secrets of other family members.

We are also introduced to Ransom Drysdale-Thrombey, the black sheep of the family, who everyone considers to be a troublemaker. It is abundantly clear that every member of the household has some motive or the other to want Harlan dead. The only question that Blanc must ask himself is who actually went through with the deed. ‘Knives Out’ becomes a study in the grievances the members have towards Harlan, which springs from the kind of relationship he shared with them. It also explores how the members react differently to Harlan’s death and process the grief.

Overall, it promises to be a somewhat serious plot with occasional comic streaks, making for an overall enjoyable experience.

Knives Out Cast: Who Is In It?

‘Knives Out’ has an immensely star-studded cast that is bound to make your head spin. Christopher Plummer appears as Harlan, the victim, while Daniel Craig appears as Benoit Blanc, the detective. Notably, Craig’s performance with a Southern drawl and infinite warmth and patience is a far cry from his portrayal in the James Bond movies. There are several other key characters like Harlan’s maid, who has a bad reaction to lying. Ana de Armas appears as the maid, Marta Cabrera. Chris Evans of the MCU movies appears as the black sheep of the family, Ransom Drysdale-Thrombey.

However, the cast does not simply end here. The members of the Thrombey family are portrayed by talented actors. Jamie Lee Curtis plays Linda Drysdale-Thrombey, Michael Shannon is seen as Walter “Walt” Thrombey, Don Johnson appears as Richard Drysdale-Thrombey, Toni Collette plays Joni Thrombey, while Katherine Langford is seen as Meg Thrombey. Lakeith Stanfield plays the role of Detective Lieutenant Elliot, who is eager to put the case to bed.

Knives Out Crew: Who Is Behind It?

Rian Johnson is directing ‘Knives Out’ and the story comes from him as well. Notably, the director made his mark with ‘Star Wars‘ films, besides directing ‘Looper‘ and some of the best episodes of ‘Breaking Bad‘ including ‘Ozymandias’. Johnson is co-producing with Ram Bergman. Steve Yedlin is the man behind the camera, and the entire project is being distributed by Lionsgate.

Knives Out Release Date: When Will It Premiere?

‘Knives Out’ has already made its debut at the Toronto International Film Festival on September 7, 2019. However, the movie is getting its theatrical release on November 27, 2019.

You can check out the trailer of ‘Knives Out’ below. It provides a dizzying look into the various members of the dysfunctional Thrombey family as Blanc quizzes them all about their motives, trying to understand concretely who slit Harlan’s throat, killing the old man.

Music From The Movie Knives Out Movie Cast

March 31 (UPI) -- Netflix has obtained the rights to two sequels to the 2019 hit Knives Out. Writer/director Rian Johnson and star Daniel Craig are expected to return. 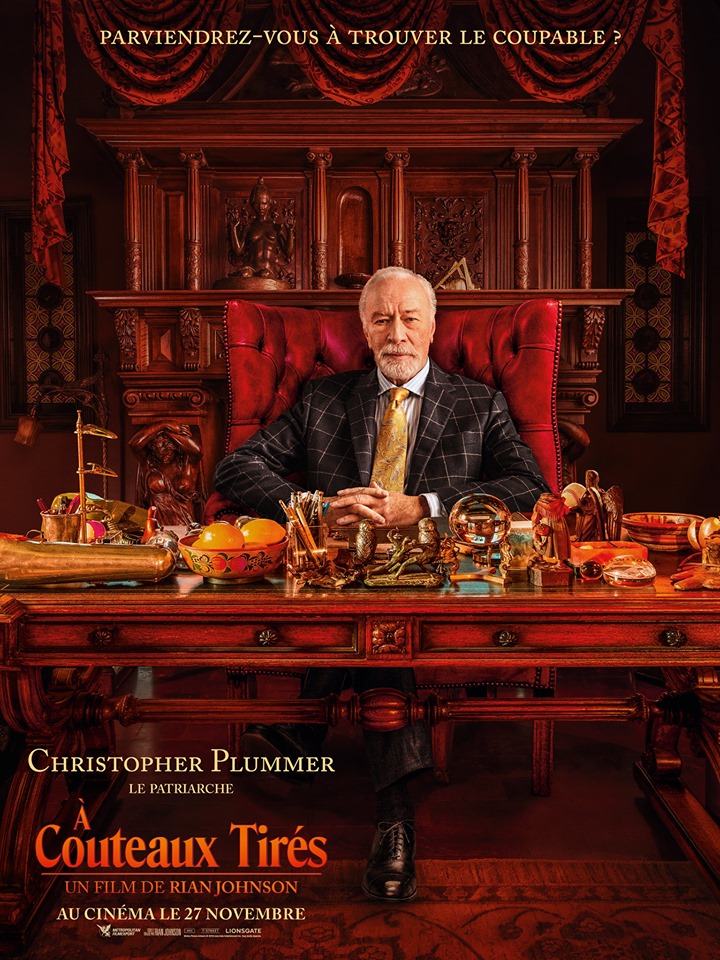 The Wrap reports that Netflix paid over $400 million for two sequels. Variety puts that number at $450 million. Macos virtualbox.

Lionsgate distributed the first film in Nov. 2019 after its Sept. premiere at the Toronto International Film Festival. Johnson was already working on a sequel, intending to film in June according to The Wrap.

Only Craig would reprise his role to solve a new mystery in sequels. The James Bond actor plays Blanc with a southern accent.

The Movie Knives Out Cast

Knives Out grossed $311 million worldwide. Johnson wrote in the Los Angeles Times that he was inspired by Agatha Christie mysteries and Alfred Hitchcock movies.