The Ford Evos debuted Monday at Auto Shanghai 2021 as the automaker's latest crossover for the Chinese market. However, the Evos could also come to the U.S. as a de facto replacement for the Ford Fusion sedan. The Fusion bowed out in 2020, leaving the Mustang as the only car in Ford's U.S. lineup.

Borrowing the name of a 2011 concept car that provided a styling preview of the second-generation Fusion, the Evos has a tall ride height, but a low, sleek roofline. It's a similar formula to the 'crossover coupes' pioneered by luxury automakers.

On the inside, the Evos gets an infotainment display that nearly spans the width of the dashboard. It includes a 12.3-inch digital instrument cluster and a 27.0-inch 4K touchscreen mounted side by side, and running Ford's Sync+ 2.0 operating system.

The driver and front passenger can use that vast expanse of screen space to view different things, according to Ford. For example, the front passenger can view 'entertainment content' on their side of the screen while the driver uses the navigation system. The system is also capable of over-the-air (OTA) software updates.

The Evos will also be available with BlueCruise, Ford's recently-branded driver-assist tech. Set to debut in the U.S. later this year on the 2021 Ford F-150 and 2021 Ford Mustang Mach-E, BlueCruise can operate the steering, braking, and throttle on designated stretches of highway, provided the driver is paying attention (an onboard camera monitors the driver). Because the driver must remain engaged, this system corresponds to Level 2 on the SAE vehicle-automation scale.

Ford did not discuss powertrains, or U.S. availability, but camouflaged test vehicles spotted earlier this year indicate the Evos might be coming here. Given its overall shape, the Evos could be positioned as a high-riding wagon, similar to the Subaru Outback or the discontinued Buick Regal TourX.

There are also rumors that Ford plans to attach the Fusion name to the U.S.-market Evos, meaning it could end up badged as the Fusion Active. Ford uses the Active designation for soft-roaders sold overseas, including the Fiesta Active and Focus Active. Ford planned to import the Focus Active from China, but the recent U.S.-China trade dispute put an end to that. 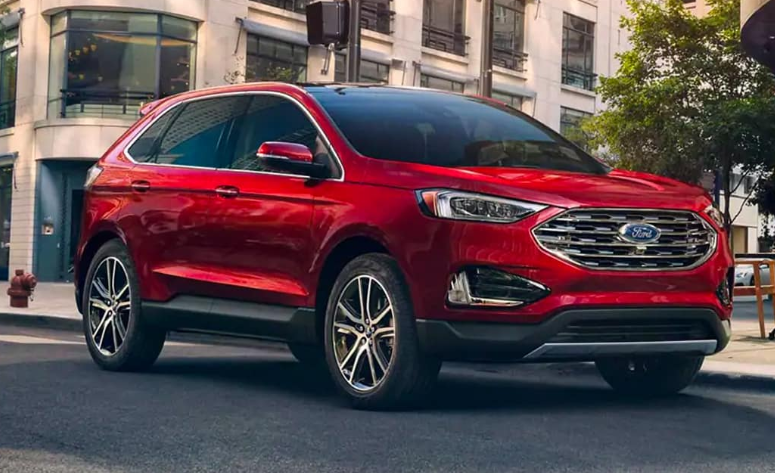 The cabin will be polarizing, that's for sure.

Ford may have officially killed the Fusion in the United States last summer in favor of more profitable SUVs and crossovers, but that doesn't mean that it's the end of the line for the Fusion nameplate.

In fact, reports of a rugged, crossover version of the Fusion, allegedly named Fusion Active, have emerged as early as 2018, and this is probably our first look of the actual vehicle – albeit still wrapped in swirly camouflage. These alleged leaked images are from cochespias on Instagram, showing the Fusion Active before you're supposed to.

As seen on the leaked images above, the Fusion Active carries the familiar Blue Oval fascia but with a bit of heft. The concealment failed to hide the narrow headlights, though most of the details aren't discernable.

Browse through the other images on the post above and you'll see the crossover from other angles. As the Ford Fusion Active is reportedly pegged to become a Subaru Outback rival, the rear images show its lifted wagon nature. After all, the Outback is practically a lifted Legacy wagon, so we're pretty much seeing the same pattern here.

Fortunately, the set of leaked images above include a shot of the Fusion Active's cabin. This is where it gets interesting as the photo shows a massive horizontal screen that spans across the fascia. While this isn’t exactly new in the automotive industry, we figured that it will be a talking point among enthusiasts and future buyers alike.

We'll more likely witness the official unveiling of the Fusion Active crossover within next year. Info is still scarce at this point, but we won't be surprised if the lifted wagon will carry a hybrid powertrain or even a different name for the U.S. and European markets.