Posted by Possidon on January 28th, 2021 @ 2:42 p.m. Age of Empires II: Definitive Edition now has a brand new DLC expansion available to buy right now! It features two new civilizations; the Burgundians and Sicilians, three new campaigns, and also adds new achievements. Check out the new expansion now on Steam or the Age of Empires Website. The introduction to The Age of Kings is a cinematic lasting one minute and forty-six seconds. It was directed by Paul DeNigris1. The first scene is a room of two kings in the middle of a chess match, illuminated by a fireplace. The music at this point is slow-paced and consists solely of a harp. White makes the first move that the camera sees: a pawn going one space forward. This immediately.

Work in Progress Spotlight XXXVII: The Shadows of Kalpireia!

Posted by Possidon on July 13th, 2021 @ 05:07 a.m.
Today we return to the fabled Works in Progress Spotlight to feature one of the biggest campaigns to every grace our heaven. For those of you who are unaware of the Works in Progress Spotlight, it is an opportunity for me, everyone’s favourite Cherub, to interview the creators of some of the most exciting upcoming projects so we can learn more about what to expect and build up the excitement to their eventual releases.
Today’s feature is one of the most ambitious campaigns I have ever heard of, but don’t worry about it not being finished because it’s coming from one of our most experienced and popular members – the scenario making machine that is Lord Basse – and the campaign is the highly ambitious 8 scenario campaign; The Shadows of Kalpireia!

And just when you thought you couldn’t get any more excited about this scenario. Here’s a couple of exclusive screenshots for you to drool over. 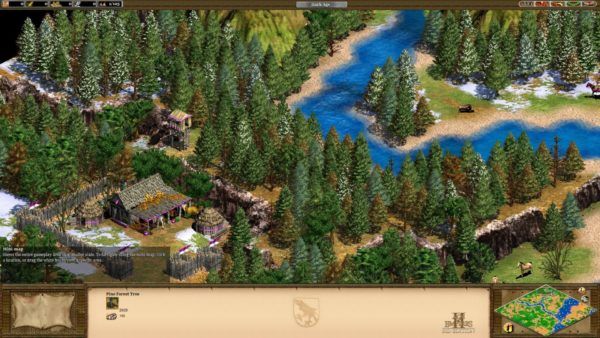 How excited are you to play this epic campaign? Keep up to date with all the latest news about its development over at the Project Thread.
Permalink Comments [3]

Dawn of the Dukes - New Expansion Announced for Age of Empires II: DE
Posted by Possidon on May 17th, 2021 @ 10:22 a.m.
Well they say news is better late than never so here you go!
In case you missed it - back in April the team behind Age of Empires hosted a fan preview event. This event included some exciting updates on the upcoming sequel Age of Empires 4 including some great gameplay previews. They also provided updates on the Definitive Editions of both Age of Empires II and Age of Empires III.
Excitingly for us, the update for Age of Empires II: DE included the announcement of a brand new expansion pack that is expected to arrive this summer! The new DLC is called Dawn of the Dukes and is expected to focus on Eastern Europe. The expansion will introduce two new civilisations, but as of yet we do not know what they will be. The other exciting announcement is that the developers have confirmed that 'a specific set of campaign missions and historical battles' in Age of Empires II: Definitive Edition will get co-op later this year.
To find out more watch the fan preview video below.
What are you most excited about from this awesome update? Start placing your guesses for the new civilisations in the comments below.
Permalink Comments [0]

Blacksmith Feature: Shattered Empire (04.26.21)
Posted by Possidon on April 26th, 2021 @ 04:27 a.m.
For the first time in eight years, and only the second time in history, the Blacksmith feature today is going to focus on a random map script. Random map scripts are fairly common pieces of work, you’ll find thousands of custom maps in the blacksmith, but to make one stand out among the rest, an author has to not only be an impressive script writer, but an artist. That’s what today’s author is above all - an artist.
For today’s Blacksmith Feature we’ll be looking at a classic, one of my all-time favourite custom random maps – Shattered Empire by Mark Stoker. If that name sounds familiar to you, Mark Stoker is the designer of some of AOKH’s most popular campaigns. Tamerlane, Prince of Destruction, Nyctophobia and Ottoman Onslaught, just to name a few. As well as being a popular designer of single-player scenarios, Stoker as dabbled in random map scripting and Shattered Empire is his crowning glory.
Shattered Empire showcases an empire shattered by civil war. Based in part on the classic Fortress map, each player starts with a walled city, completed with all of the military buildings, towers and some residential houses. Add in some additional starting villagers and you’ve got an action pack game with plenty of space for rushes and early sieges. Beyond the intense gameplay that this map presents players, the highlight of the particular script in its beautiful visual appeal. In his single-player scenarios Mark Stoker showed off his artistry and he has managed to convert that beauty into a script for this map. Never before have I see such a detailed and gorgeous looking random map, with a beautiful blend of terrains and eye-candy.
Whether you’re a player who likes intense action pack gameplay or you just like to admire the beauty of a map designers craft then this is definitely the random map for you. So go ahead and download it now!
Permalink Comments [8]

Minigamne Competition - Results Announced
Posted by Possidon on April 22nd, 2021 @ 03:58 a.m.
After a very prolonged judging process the results of the 2020 Minigame Competition have finally been announced. Four creative scenario were submitted to the contest but one shone above the rest to claim the crown: duyhung2h!
duyhung2h's winning scenario titled Rebirth of the Colosseum showcase a variety of creative gameplay elements and design skills, in a story which reimagines the colosseum being reopened 800 years after the fall of the Roman Empire.
Congratulate duyhung2h and see the full results, complete with the judges comments over at the official contest thread and download all of the entries from the Blacksmith.
Permalink Comments [0]

Age of Empires 2: Definitive Edition Expansion Coming soon!
Posted by Sebastien on December 21st, 2020 @ 05:15 a.m.
Roughly one year ago we finally got the expansion (and HD update) the game deserved. At the time, the devs made it clear they had no plans for any future civilisation updates in future; and instead were going to focus on content and additional campaigns etc.
Well, turns out that wasn't true as they've recently announced another expansion called, Lords Of The West. Lords of the West will feature not three new campaigns, but an additional TWO civilisations.
Players will now be able to take to the battlefields as either the Sicilians and Burgundians. On top of that, there are three new campaigns in total, and a possible remake of the original Joan of Arc campaign to include the Burgundians.
Civilizations:
Burgundians:
Rise from a mere duchy to the marvel of Western Europe through economic might, cultural achievement, and the use of advanced military technology and tactics. The Burgundian unique unit is the Coustillier, a cavalry unit that utilizes a powerful shock attack when charging into battle!
Civ Bonuses:
- Cavalry Civilization
- Economic upgrades are available one Age earlier than other civs
- Fallen Knights return 50% of their gold cost
Unique Units:
- Coustillier: Cavalry unit that can charge their attack stat
- Flemish Militia: Heavy infantry unit with a bonus vs cavalry; can only be obtained via the Flemish Revolution technology
Unique Techs:
- Burgundian Vineyards: Convert all food into gold at a 2:1 ratio
- Flemish Revolution: Upgrades all existing Villagers to Flemish Militia
Sicilians:
Experience the diverse cultures and martial spirit of the Mediterranean’s crossroads as you build one of the most coveted kingdoms in medieval Europe. The Sicilian unique unit is the Serjeant, a hardy infantry unit that can construct the formidable Donjon.
Civ Bonuses:
- Infantry Civilization
- Castles and Town Centers are constructed 100% faster
- Land military units absorb 33% of all incoming bonus damage
- Each Farm upgrade grants Farmers +1 carry capacity
Unique Building:
- Donjon: Unique fortification used to train Serjeants. Units can garrison in the building for protection; Archers and Villagers shoot additional projectiles when garrisoned.
Unique Units:
- Serjeant: Infantry unit which can also construct Donjons
Unique Techs:
- First Crusade: Upon researching, each Town Center spawns a one-time group of 7 Serjeants
- Scutage: Upon researching, each team member receives a one-time payment of 15 gold for each military unit that they own.
The expansion is currently taking pre-orders, and it set to be released on January 26, 2021.
Permalink Comments [0]

Minigame Compeition 2020 - Deadline Closed
Posted by Possidon on November 09th, 2020 @ 08:01 a.m.
The Deadline for the Minigame Competition has now passed. This year we've received for interesting entries and we can't wait to hear the results. Now it is time to wait for the judges to play through them and write up their results. Stay tuned for more..
Whilst you wait you can play through the entries yourself by downloading them from the blacksmith here.
Permalink Comments Disabled

Minigame Compeition 2020 - 2 Days to Go!
Posted by Possidon on November 05th, 2020 @ 03:35 a.m.
There's only 2 days to go until the deadline for the 2020 Minigame Competition. Get those final playtests in and upload your campaign to the Blacksmith before 11:59pm (forum time) for you entry to count, and the judging process begins.
Permalink Comments Disabled

Copyright © 1997–2021 HeavenGames LLC. All Rights Reserved.
Please obtain prior written permission from HeavenGames if you wish to use our site's content and graphics on other sites, publications, or media. Age of Empires II: The Age of Kings is a game by Ensemble Studios and published by Microsoft Game Studios.
Disclaimer Privacy Statement Forum Code of Conduct

Lords of the West, now available for purchase!

Challenge your friends with two new Civilizations that include unique units and technologies for you to explore. Battle across Western Europe and the Mediterranean with three new campaigns, and claim victory by means of sheer military might, diplomatic prowess, or through overwhelming economic power!